I’ve now posted eleven postings* tracking the ancestry of Strachan/Strahon Monk, who was born about 1787 in Bertie County, North Carolina, and who died between 1850-1858 in Hardin County, Tennessee. About 1805, Strachan Monk married Talitha, daughter of Jesse Cherry (1749-1808) and Elizabeth Gainer (abt. 1761-1836) of Martin County, North Carolina. Between 1810-1820, this couple moved to Tennessee, joining a number of Talitha’s brothers there, who were early land speculators in the daughter state of their native North Carolina.

Two of Talitha’s brothers — Jesse and Isham — settled in Hardin County, as Strachan and Talitha Cherry Monk did, while other of her brothers — Lawrence and Darling, who remained in Martin County, and Daniel, who settled in Haywood County, Tennessee — owned land there. As a previous series of postings about Strachan and Talitha Monk’s years in Hardin County demonstrated, they lived there on land on the Tennessee River loaned to them by Talitha’s brother Daniel (see here, here, and here).

My primary interest in these families is that I descend from Strachan and Talitha Cherry Monk’s daughter Minerva (abt. 1812-1860), who married Moses B. Batchelor (1808-1883), son of Wilson Richard Batchelor (1775-1858) and Alcie Odom (1790-1848), who moved from Nash County, North Carolina, to Hardin County, Tennessee. Moses and Minerva are my great-great-grandparents.

As we’ve seen, Strachan Monk was the son of Nottingham Monk (abt. 1755-1818) and Rachel, daughter of George and Elizabeth Strachan of Bertie County, North Carolina. Up to this point, my postings about Strachan Monk’s ancestry have focused on his Monk line. This chart captures what I know of the male ancestors in that line: 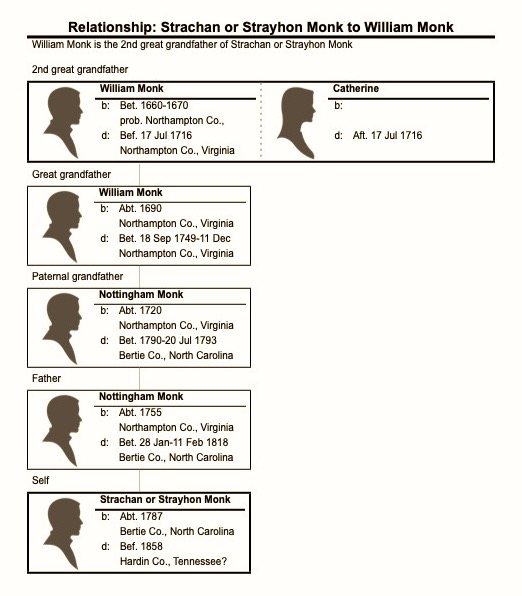 I’d like now to shift attention from the Monks to Strachan Monk’s Nottingham line of ancestry. As my series of postings on his Monk ancestry have shown, the given name Nottingham (the name of both Strachan Monk’s father and grandfather) comes into this Monk family through the marriage of William Monk (abt. 1690-1750) to Elizabeth, daughter of William and Mary Nottingham of Northampton County, Virginia.

I summarized in a previous posting what I know of Elizabeth Nottingham Monk’s life. Here are salient points:

Here’s what I know about the life of William Nottingham:

The Will of William Nottingham, Northampton County, Virginia, 1718

In ye Name of God amen. I Wm. Nottingham of Northampton County Doe Ordaine this for my Last will and Testamt. Revoking all former wills or Testamts In manner as followeth —

Item my will and Desire is yt my wife may Injoy my plantation During her Life[time?]

Item I Give Unto my Daughter Elizabth. Munk Seventy five akors of Land by Istimation upon ye North Side of my Land by a Line of Marked trees from ye Little branch beginning at a Marked pine from thence to ye Sidor press from thence to ye Extent of my Line [Compleate?] ye Same to her & her heires Lawfully begotten of her Body —

Item I Give my Daughter Susana one Long Table & one pare of Silver Clasps onely my wife to have them During her Life & one form wch. belongs to ye Table

Item I give unto my Daughter Elizabth. one Cow & Calf to be paid by Executrix heareafter Named

Item I give all ye rest Remaindor of my Estate after my Debts paid to my wife & Daughters Mary & Sarah to be Equally Divided between ym. only my wife to have itt During her Life but if She Should Marry ynmy Desire is yt She Should Come to A Equall Division Directly with my two Daughters Mary Nottingham & Sarah Nottingham —

My will is that my Estate Shall not be appraised  I Appoint my Loving Wife ye Sole Executrix of this my Last will Testamt: my Desire that francis Batson & Severn Eyre may be assistants to see my will fulfiled witness my hand seals This fifth day of November Anno Dom 1718

The Last will & Testamt. of Wm. Nottingham decd Was presented in Court by his Executrix Mary Nottingham who made Oath thereto & being proved by ye Oaths of Richard Nottingham Jacob Nottingham & Severn Eyre Witnesses thereto is admitted to Record & on ye mottion of ye Sd Mary Nottingham She performing what is befallen [unto her?] Casses a Certificate is granted her for Obtaining a probate thereof in due form.

According to Ralph Whitelaw in his Virginia’s Eastern Shore, the early house of Severn Eyre on Hungars Plantation (which is no longer standing) was located on Wilsonia Neck near the present community of Machipongo, in the same tract in which Richard Nottingham (1621-1692), father of William Nottingham and the immigrant Nottingham ancestor in Northampton County, settled.[35] As noted above, Severn Eyre (abt. 1690-1728) witnessed William Nottingham’s will. He was the son of Thomas Eyre and Jane Severn, and married Gertrude, daughter of Henry Harmanson and Gertrude Littleton. Severn Eyre died testate before 18 April 1728 in Northampton County, with a will witnessed by (inter alia) Robert Nottingham, a son of William Nottingham’s brother Robert, who died in 1698.[36]

Whitelaw notes that most of what is now called Wilsonia Neck in Northampton County was originally patented by William Stone, and was known as the Hungars plantation tract.[37] This is the same William Stone who appears to have brought a William and an Edward Monk to Virginia by 1640/1. As noted previously, the land bequeathed by Teigue Harmon in his 19 February 1684 Northampton County will to his wife Elizabeth, and after her decease, to Mary, wife of Richard Nottingham Jr., and to Richard’s brother William Nottingham, was also in this Stone tract.

Littleton Eyre (abt. 1709-1768) was a member of the Virginia House of Burgesses who acquired large tracts of land in Northampton County. In 1760, he built a house called Eyre Hall, which remains in possession of the Eyre family and was added onto by generations after Littleton Eyre. The house has been named a National Historic Landmark.[40]

Whitelaw’s Virginia’s Eastern Shore includes a photo of this historic house, as does Virginia B. Price’s exhaustively researched history of the house when it was nominated in 2011 as a National Historic Landmark.[41] As Price’s history of the house notes, a number of sources have reported that, incorporated into the chimney in the past was a stone with the date 1672 inscribed in it. This has led some researchers to conclude that at least the brick and stone portions of the house’s foundations may date from an earlier house built or occupied by Teigue Harmon.

* For the sake of convenience for anyone wanting to follow my entire series of postings documenting the Monk ancestry of Strachan/Strahon Monk, I’ll provide links to each posting in the chronological order in which they appear on this blog:

Will the Real Strawhorn Monk Please Stand Up? Documenting the Life of Strachan Monk (1787 – 1850/1860), Son of Nottingham Monk and Rachel Strachan

Will the Real Strawhorn Monk Please Stand Up? Documenting the Ancestry of Strachan Monk (1787 – 1850/1860), Son of Nottingham Monk and Rachel Strachan (1)

Will the Real Strawhorn Monk Please Stand Up? Documenting the Ancestry of Strachan Monk (1787 – 1850/1860), Son of Nottingham Monk and Rachel Strachan (2)

Will the Real Strawhorn Monk Please Stand Up? Documenting the Ancestry of Strachan Monk (1787 – 1850/1860), Son of Nottingham Monk and Rachel Strachan (3)

Elishe Monk, Her Son Thomas, and His Father Thomas Speller: Some Questions These Stories Pose

Will the Real Strawhorn Monk Please Stand Up? Documenting the Ancestry of Strachan Monk (1787 – 1850/1860), Son of Nottingham Monk and Rachel Strachan (4)

Will the Real Strawhorn Monk Please Stand Up? Documenting the Ancestry of Strachan Monk (1787 – 1850/1860), Son of Nottingham Monk and Rachel Strachan (5)

[12]See M.K. Miles’ MilesFiles 19.1, p. 546; and Virginia Custis Winslett’s “Custis Chronicles,” p. 65, noting that the will of Samuel Palmer bequeathed half of a mill to his wife Sarah and the other half to her daughter Sarah Custis Matthews.

This site uses Akismet to reduce spam. Learn how your comment data is processed.