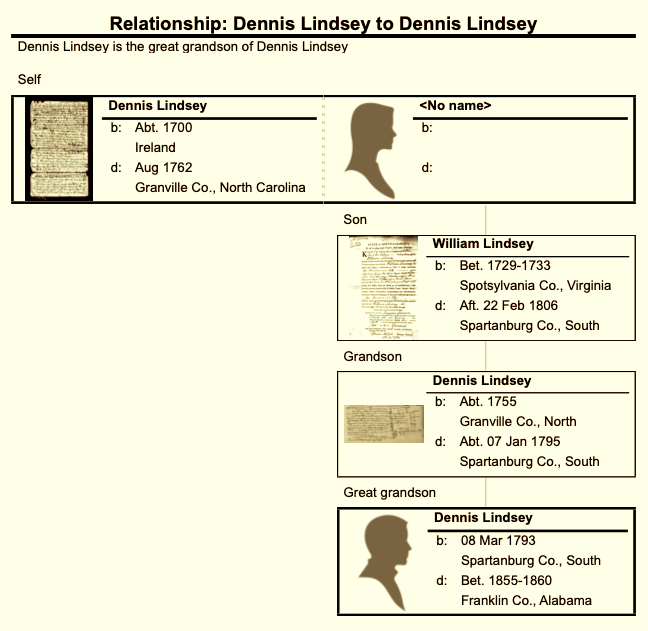 As I’ve noted previously, the only child of Dennis Lindsey (abt. 1755-1795) for whom we have definitive proof is his son Dennis, who was born in 1793 in Spartanburg County, South Carolina, and died between 1855 and 1860 in Franklin County, Alabama. Unfortunately, though we know with certainty that the younger Dennis is son of the older Dennis, there’s much that is unclear about the life of Dennis younger. END_OF_DOCUMENT_TOKEN_TO_BE_REPLACED

Or, Subtitled: Land Deeded Before Being Granted

In this next posting chronicling the life of Dennis Lindsey (abt. 1755-1795), son of William Lindsey (abt. 1733-abt. 1806), I’d like to focus on records pertaining to a 248-acre tract of land between Jamey’s and Ferguson’s Creeks of the Tyger River granted to Dennis in November 1792. This is the only piece of land I find Dennis owning at any point in his life — and it appears that, even before he acquired the grant, he had signed half of the land to George Bruton by a bond he made before the grant was made. Before we look at records about that piece of land, I want to remind you of some points I made in my previous posting, which are important to keep in mind as we look at records regarding Dennis’ land grant of 248 acres: END_OF_DOCUMENT_TOKEN_TO_BE_REPLACED