Or, Subtitled: Unpaid Civil War Voucher Claims and Migration of an Alabama Family West to Arkansas, Texas, and Oklahoma

After Miles filed his claim with the Southern Claims Commission on 24 October 1872, I don’t have a great deal of information about the rest of his life, because of the paucity of records in Franklin County, Alabama, after its courthouse fire in 1890. As I noted in a previous posting, testimony that Miles gave on 13 December 1878 in his Southern Claims Commission file shows him still alive on that date, but by 18 June 1880, when his family was enumerated on the census in Franklin County, Alabama, his wife Jane appears as a widow, so it seems clear that Miles died between those two dates, almost certainly in Franklin County.[1] Other documents in this file show Jane filing, on 4 February 1888 as administratrix of Miles’s estate, in a legal appeal to have his Southern Claims Commission claim honored. The file also shows Jane receiving letters of administration on Miles’s estate on 20 June 1890. These are valuable documents, since the 4 December 1890 courthouse fire destroyed the county’s estate files prior to that date. END_OF_DOCUMENT_TOKEN_TO_BE_REPLACED 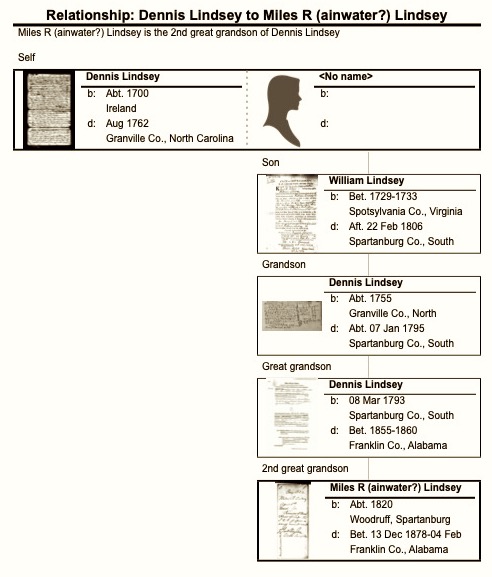 Or, Subtitled: Land Plats and Tax Assessments as Genealogical Resources

When I finished my account of the life of Dennis Lindsey (1793-1855/1860), son of Dennis Lindsey (abt. 1755-1795) of Spartanburg County, South Carolina, I told you I’d move on to an account of the children of Dennis younger and wife Anna Woodruff. As my postings about Dennis have indicated, due to the loss of early Franklin County, Alabama, records in a devastating courthouse fire in 1890, there are many gaps in the documentation of Dennis and his family after he moved to Franklin County, Alabama, about 1827-8. No estate record naming his children has survived. END_OF_DOCUMENT_TOKEN_TO_BE_REPLACED